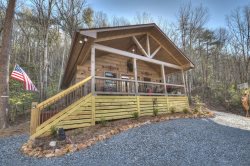 If you have not experienced a fall season in North Georgia, now is the time! Surrounded by the natural beauty, gather around the firepit or warm up in the hot tub after your outdoor adventures.

Southern Comfort has been in business in Blue Ridge for 20 years and we pride ourselves in premiere customer service!

Every year in Blue Ridge, GA, Fannin Countys Blue Ridge Lodging Association hosts one of the most popular events in the entire Southeast U.S: The Blue Ridge Blues & BBQ Festival.

Taking place September 20th in the heart of Downtown Blue Ridge, the Blue Ridge Blues & BBQ Festival is a fantastic event for the whole family to enjoy. Bring your friends, family, a few chairs and your appetite, because this years event is bigger and better than ever!

The Blues & BBQ weekend starts Thursday, September 18th with the official kick-off party for the festival at the Chamber of Commerce After Hours party. The fun continues Friday, September 19th with the 3rd annual Blues Crawl from 7pm-11pm, where blues and BBQ lovers have the opportunity to visit 8 of Blue Ridges favorite food stops, and enjoy 8 live bands along the way.

FREE ADMISSION SPECIAL: Participate in the Friday night Blues Crawl and get our official Rack Card punched by each Crawl stop. Bring fully-punched card to the festival on Saturday and get in FREE! Rack Cards can be obtained from you Blue Ridge Lodging provider.

The weekend culminates September 20th, 2014 with the 4th annual Blues & BBQ Festival from 12pm-9pm. Come out and enjoy this one-of-a-kind event, rain or shine and enjoy unctuous eats, soulful music and the fresh air of the North Georgia Mountains.

DO TO THE NATURE OF THIS EVENT: NO COOLERS, NO PETS, NO SMOKING, NO UMBRELLAS, NO FIREARMS

Sign up for our e-newsletter to receive exclusive opportunities and get first dibs on new cabins!